This case study demonstrates the holistic approach every patient receives at The Twyford Clinic. This article has been written with permission but I will not reveal any details about his identity. He was an ex special forces soldier who had served for years, the pounding his body received had led to chronic pain through his whole spine. This was so bad he was medically discharged six years ago. 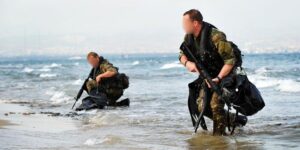 He had attended Headley Court a specialist rehabilitation centre for the services, had previously had physiotherapy, spinal mobilisations, exercises and acupuncture. He had been to the Pain Team and tried all types of medication and spinal injections. None of this settled his pain…

When he attended he was desperate for a solution. I reviewed his whole body and gave him a full biomechanics and neural system assessment. I noted he had restricted range mainly in the neck with a focal tenderness in whole of the neck especially the upper cervical spine, spasm in the thoracic spine and cervical spine musculature.

As he had had so much input from other clinicians I decided to approach his treatment from a different angle and utilise my experience in treating chronic pain. The pain system is very complex and he presented with a severely altered pain and neural system.

The upper cervical spine serves as a gateway to the rest of the body neurally and if this region becomes blocked or the pain control systems alter due to the chronicity of pain overload for years the system needs a reset. He had had a lot of trauma due to his work in the special forces with incredible forces smashing through his spine for years which had led to trauma to the spine, however these injuries should and would have mostly healed a long time ago, so my treatment needed to focus on the pain system.

I began with spinal mobilisations and after the second session added acupuncture and after only one session of this he reported he had a pain free neck for the first time in ten years. My treatment progressed with both mobilisations and acupuncture for a period, but the more I worked on the acupuncture he responded much better and I focussed solely on acupuncture treatment. This was specifically tailored to treat both the trigger points in the muscles to reduce the spasm and special acupuncture points which address the pain in a specific region and alter the pain modulation control centre in the brain.

He responded extremely well and over a period of a few months he progressed to be pain free. He is of course very happy with this and I have managed his return to training in the gym and he has a fully active life again.

You too will experience Special Service and gain improvement if you are struggling with acute or chronic pain with a visit to The Twyford Clinic.